The spectacular Grade II listed glorious Trafalgar Theatre is the result of a major multi-million pound restoration project reinstating the theatre back to its original heritage 1930’s design, some of which has not been seen for over 90 years.

Within the new single 630 seat auditorium, the newly restored decoration and lighting is black with silver, bronze and gold metallic hints, reflective of the original interior’s colour palette. Using historical photographs as a reference, the auditorium carpet and seating fabric replicate the original design patterns, with greens, creams and yellows to contrast against the monochrome walls.

The Balcony front – that had been carefully stored away for a number of years when the theatre was two studio spaces – has been beautifully restored and refitted to spectacular effect, along with the grand ceiling and proscenium arch.

Standing as it does at the confluence of Whitehall and Trafalgar Square, it is tempting to see Trafalgar Theatre as a mediator between two worlds – Downing Street and Shaftesbury Avenue, the Mother of Parliaments and Theatreland.

Its position at the cutting edge of the West End mainstream has also made it easier for successive generations of managements to be boldly innovative in determining the character of the venue. Its current reincarnation as the flagship for Trafalgar Entertainment is only the latest chapter in the always surprising story of this chameleon in theatre form.

In what seems a bold move, given the seismic ructions of the Wall Street Crash, the Whitehall Theatre opened its doors on September 29th 1930, the third new West End theatre to appear that month. It was built where The Olde Ship Tavern once stood before the hostelry was obliged to cross Whitehall and open for business facing its former site. Walter Hackett, the Whitehall’s first Manager, happened to be a prolific author of modern comedies. The first play to run at the Whitehall was Hackett’s The Way to Treat a Woman followed in quick succession by Good Losers, Take a Chance and The Gay Adventure plus Road House and Afterwards.

There was considerable enthusiasm for the theatre on opening. The Times gave its verdict in the edition of September 29th 1930; “At any rate, there can be no doubt from the first glance at its tower-like façade with tall windows, the Whitehall Theatre prepares you for something brisk and up-to-date. What it suggests is the atmosphere of combined comfort and alertness, not without a certain heartlessness, which becomes the modern comedy.” And in the Architects’ Journal of January 1931, Professor C.H. Riley commented that the Whitehall Theatre was “so clean and simple in its line that it makes the new Government offices, Banks and Public Houses of that great thoroughfare look as if they needed a shave”. An anonymous visitor drooled over the interior touches “a little Art Deco Jewel in near Black and Silver”, they opined.

If the Art Deco interiors appealed mainly to the high-minded, the next remarkable figure in the history of the Whitehall was the burlesque dancer Phyllis Dixey who calculated, no doubt accurately, that striptease was just the ticket for sex-starved young squaddies, protecting the country from the Nazis. The Whitehall Follies and the Peek-a-Boo revues was arguably the first time that such entertainment was seen in a respectable West End theatre and it established yet another personality for the venue.

After the war, The Whitehall turned to comedy, or more particularly to farce when Brian Rix and his company moved in for Reluctant Heroes in 1950. The Whitehall Farces, as they came to be known, were the perfect antidote to the monochrome gloom of the later post-war period. Rix, later ennobled, would invariably play the gormless innocent, but he displayed a shrewd understanding of publicity and his name became synonymous with farce. The plays were often screened on television where they drew enormous numbers of viewers, and the term Whitehall Farce became shorthand for a government scandal or cock-up which probably originated in the vicinity of the theatre. The Aldwych Farces of the 1920s and 1930s have their admirers but Rix’s Whitehall Farces ran cumulatively for much longer. Reluctant Heroes was followed by Dry Rot, Simple Spymen, One for the Pot and Chase Me, Comrade clocking up an impressive sixteen years. Rix’s companies included his actress wife Elspet Gray, actor Terry Scott, Ray Cooney the future farce-writer extraordinaire and Andrew Sachs en route for Manuel in Fawlty Towers.

The Rix era came to an end when he was unable to secure the lease but he continued to appear in various parts of the West End before deciding to retire. The Whitehall then passed to Paul Raymond, the man who reportedly owned most of Soho and an impresario who, harking back to the Phyllis Dixey years, specialised in what used to be called “Adult Entertainment.” To judge by the run of more than five years enjoyed by Pyjama Tops, he had a keen eye for public taste.

It may have coloured his conviction that his next venture The Whitehall Theatre of War would draw the town. Essentially a war museum dramatizing the events of WWII, attractions included a Spitfire, dangling from the ceiling of the theatre. Unfortunately, the powers-that-be took the view that the theatre was in breach of its licence and the Whitehall Theatre of War had to declare an Armistice.

In the 1980s the theatre was partially renovated and relaunched as a conventional venue with a fine production of Priestley’s When We Are Married with Patricia Routledge, Timothy West, Prunella Scales and Bill Fraser.

The Whitehall then gave way to the Trafalgar Studios in 2004, the former Whitehall Circle transformed into Studio 1, while the former Whitehall Stalls were re-invented as Studio 2. It quickly established itself with a programme of must-see productions alongside the unique opportunity for new writers, designers and producers to debut their work in a West End venue.

In 2020, during the Covid-19 pandemic, the spectacular Grade II listed building was gloriously restored to its multi-faceted Art Deco era with a major multi-million pound restoration project reinstating the theatre back to its original heritage 1930’s design, some of which has not been seen for over 90 years. Whilst all West End theatres were dark – for the longest period since Oliver Cromwell’s reign – the venue continued to be a hive of activity. 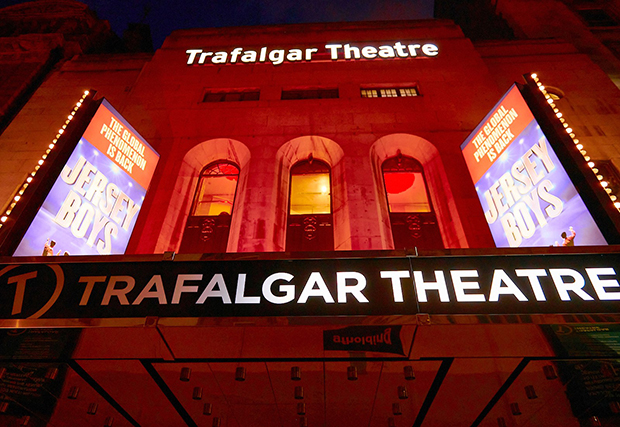 Trafalgar Studios was renamed Trafalgar Theatre and its two studio spaces were converted into a single 630-seat auditorium. The newly restored decoration is reflective of the original interior’s colour palette. Using historical photographs as a reference, the auditorium carpet and seating fabric replicate the original designs patterns. The Balcony front – that had been carefully stored away for a number of years when the theatre was two studio spaces – has been beautifully restored and refitted to spectacular effect, along with the grand ceiling and proscenium arch.
Alas, after the drought of live entertainment felt in 2020-2021, the show must go on! The theatre finally opened again in July 2021 and proudly resumes as the new home of the much-loved Tony, Grammy and Olivier Award-winning smash hit musical Jersey Boys. 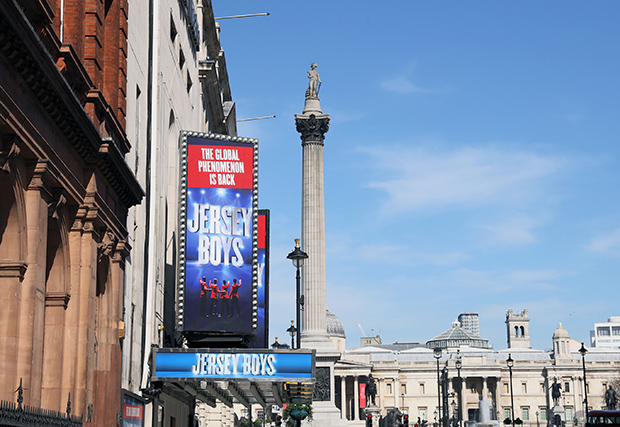